It used to be, whenever I went back to Chicago, I would make a point of visiting my favorite painting, Gustave Caillebotte’s Paris Street, Rainy Day. This is the very first painting I ever fell in love with, and it’s the first unofficial episode of Artipoeus, when my dad asked me, on one visit, what I liked about it. Because he likes landscapes, and this painting is a cityscape. And there are people in it. On a paris street. On a rainy day. 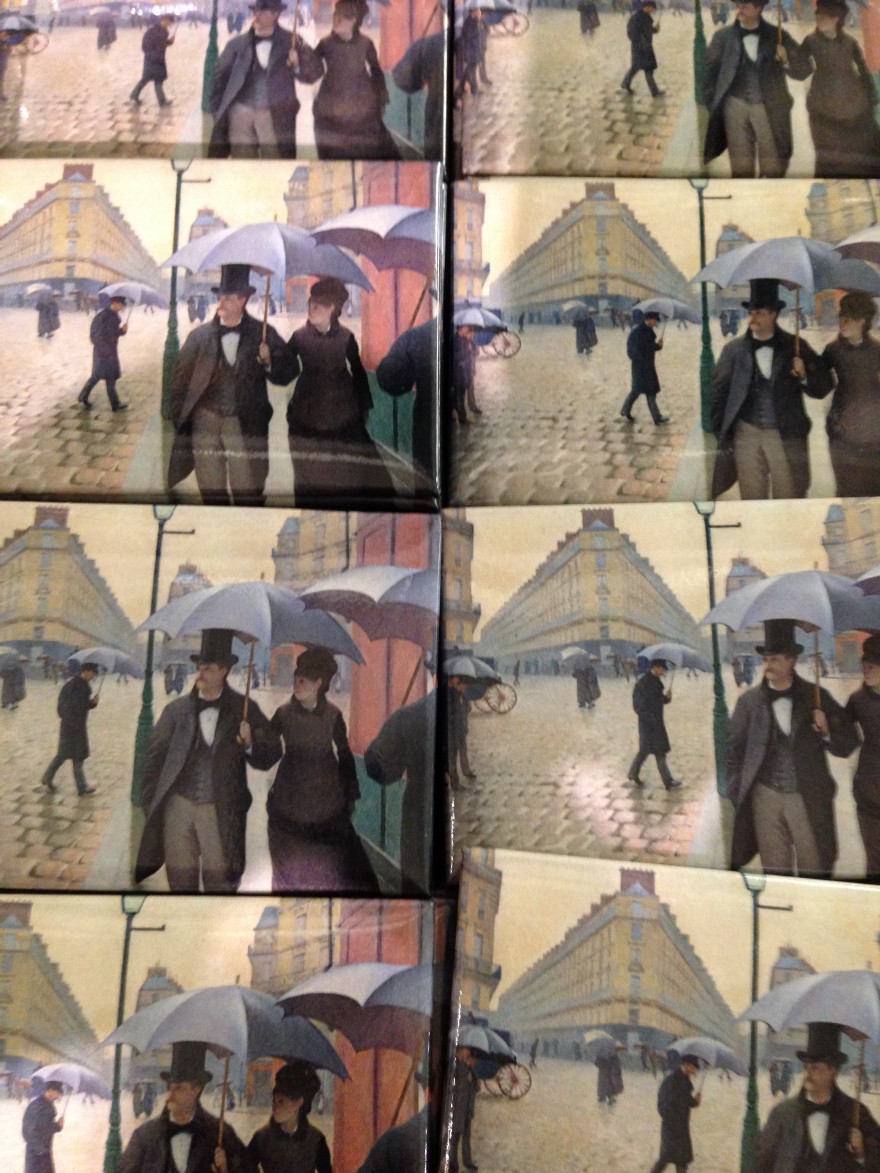 It used to be that I always made a visit to my favorite painting, but then Chicago got The Bean. And then that became my favorite thing to see. It’s so shiny. 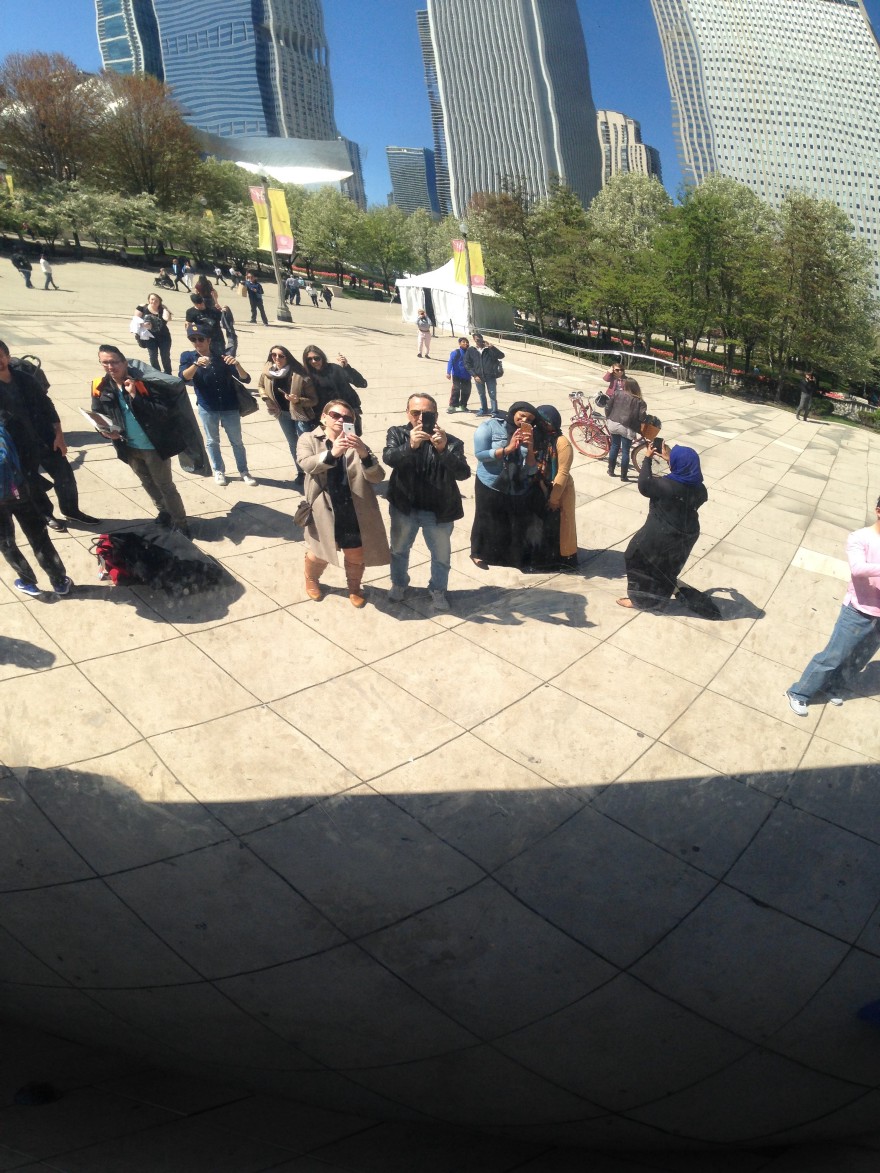 The author and her dad and tourists, reflected in Cloud Gate 2017

I just flew in from Chicago, and boy are my arms tired. It was my first visit back to the States in two years. Things there are… more American-y.

And as usual, I made a bee-line for the Bean. The Bean, as it’s known by everyone who is not Anish Kapoor, is the centerpiece of Chicago’s Millennium Park, officially unveiled in 2006. Inspired by liquid mercury, Kapoor’s design is made up of 168 stainless steel, highly reflective plates with no visible seams. Meant to celebrate the city and her famous skyline, and elevate the visitor — hence the name CLoud Gate — it has become a major tourist destination and is, in my opinion, one of the most perfect pieces of public art ever created.

And anyway, it’s in the shape of a kidney bean, so what do you want, Anish Kapoor? It’s the Bean!

Although Kapoor’s vision was to uplift and transform the visitor, The Bean doesn’t do that. And it doesn’t do that because transformation is a singular experience, and you are never alone with The Bean.

And because you are never alone with The Bean, it is firmly rooted on the ground. Which is what I love about it. It is, to me, one of the most perfect examples of public art in existence. It incorporates the huge Midwestern sky and the magnificent Chicago skyline. But most importantly, it incorporates the people too — and it’s the people that make a city. Although they are perhaps shaped by architecture and weather and geography, and certain types of people flock to certain cities, a city is just a collection of buildings unless there are people who inhabit it. Think of office parks or huge plants out in the middle of nowhere.

In a more literal way than Caillebotte’s painting, you enter the Bean — the city enters the bean, the sky enters the bean, and you enter it too. The curious quality of the reflective surface tends to reflect images from somewhere inside the mirrored surface, rather than bounce them off. You are all one, living in this strange globule dropped from space. Because the Bean is such a tourist destination at this point, the sheer diversity of people reflected in the Bean is spectacular — people from all over the world, in all kinds of dress and costume, of all colors, religions, genders, ages, sizes, contained, trembling, inside The Bean like in a reflective pool in the 4th dimension.

You can touch it, run your hands over it’s strange reflective surface with no visible or tactile seams. It is made of a material that doesn’t heat up and make it too hot to touch in the summer, nor too cold in the Chicago winter so your tongue won’t stick to it in winter — which was, by the way, a real concern of the city when considering Kapoor’s proposal because: the Midwest.

from “A Christmas Story”

You can walk under it — it has an omphalos, the Greek word for “navel”. What it’s supposed to signify is the Greek idea of the center — in Greek mythology, Zeus sent two eagles across the world to meet at its center, the “navel” of the world. And if Chicago is the largest city in the Midwest, and the Midwest is supposed to be the middle of America, and if you believe that America is the center of geopolitical power and currency and is therefore the most important place in the world, then: sure. I’ll buy that for a dollar.

But Omphalos is also the place where the masculine and the feminine meet, which is what Anish Kapoor had in mind, and that allows direct communication with the gods. 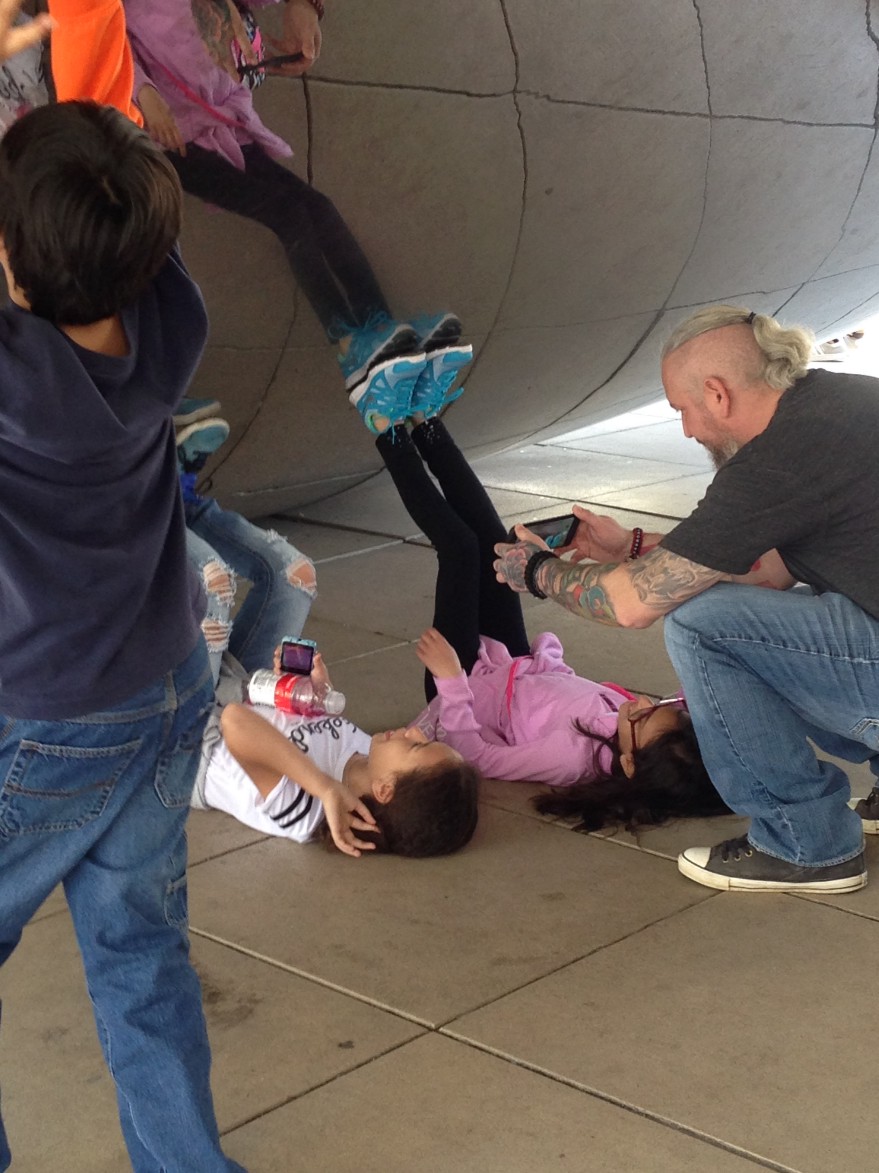 Kapoor’s work often wrestles with ideas of chaos, creation, transformation, and enlightenment that can encompass a full spectrum of disciplines, from physics to spiritualism to mythology to design to architecture or, in short, meant to lift the viewer from human realm into the unknown — whether the uncharted territory of spiritual enlightenment through works like Cloud Gate, or the existential exploration of identity through works like Descent into Limbo, Kapoor’s black hole installed in a flooring surface and using the pigment Vantablack, a black so black it absorbs 99.96% of light, making you wonder, if you stick your hand in the hole, if you’ll ever see it again.

There was a hoax in 2016 that Kapoor had covered the Bean in Vantablack. “The public has had a decade to interact with the reflective surface of ‘Cloud Gate,’ and I felt it was time for a change,” the hoax article quotes Kapoor as saying. “Since I started taking on these large public projects, the world has become a much darker place,” he said. “I want my work to reflect that.”

This actually doesn’t sound too out of character for Kapoor, who has said that the pet name for Cloud Gate — The Bean — is “completely stupid” (not fake news!). The artist himself is constantly at war with a public he generally deems too stupid to interact with his public works as he intends them to be — using them for entirely human purposes, like selfies and backdrops to Hollywood movies, instead of for reflection, for transformation, for enlightenment. So I guess he knows how the Buddha, Jesus and Mohammed felt.

And while Cloud Gate does reflect loftier visions, and the loftier, transformative ideals of Anish Kapoor. And that’s necessary — humans need lofty ambitions, It’s why we have religion. Hell, it’s why we have art. 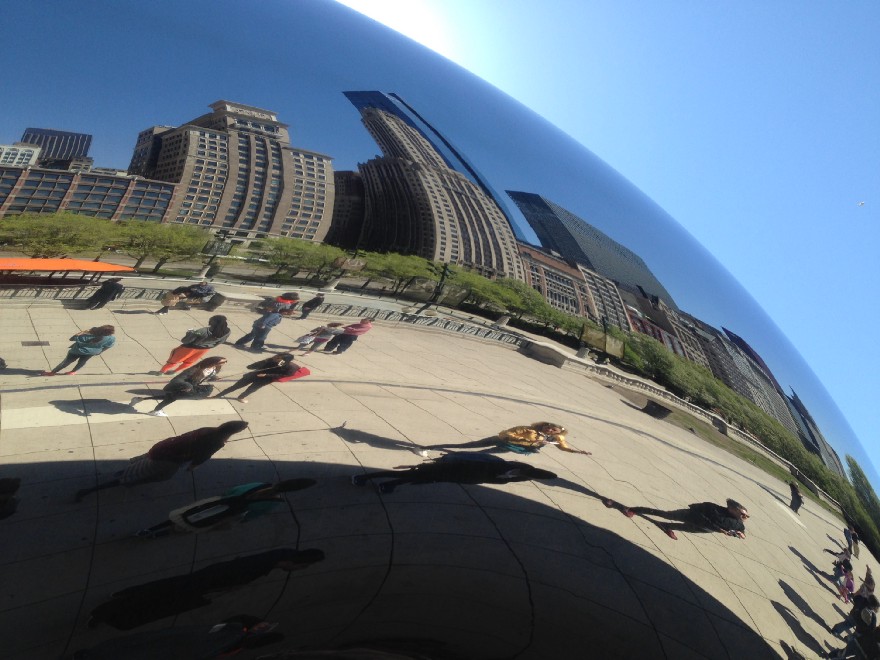 But it does not’ reflect the irony of the gleaming Trump tower and the giant five letters of the President’s family name slapped onto the surface, hovering over the Du Sable bridge, named after Jean Baptiste Point du Sable, the founder of Chicago, believed to be of African descent and who was arrested in 1779 by British military on suspicion of being an American sympathizer in the American Revolutionary War.

It doesn’t reflect the kids wandering around Millennium Park, selling peanut M&Ms 3 for $10 to support their fictional baseball teams, just trying to make a buck; it doesn’t reflect the homeless people who line the Magnificent Mile, each to his or her own spot, some with tents, almost all with signs that are dense little summaries of “how I got here” stories packed onto 2 foot x 2 foot cardboard signs that remind me of instagram star Timothy Goodman’s stories and love poems crammed into those little squares.

It doesn’t reflect the gang members, both the dead and the soon-to-be-dead, or the emergency workers so fatigued by gun violence they got a front page article in the Chicago Sunday Tribune, or the gun stores that took out full page ads in the nation and world section of that same Sunday paper.

It doesn’t reflect the homeless woman I saw trying to hide in the shadows of the skyscrapers on Michigan Avenue, her two small children shuffling behind her, dirty and serious and their eyes bright with hunger.

But imagine if an artist was so powerful, a piece of art really could produce a mass transformation, like an artistic Jonestown (but nobody dies)? Gustave Caillebotte’s Paris Street, Rainy Day is what drove me to Paris, where I spent 6 years of my life, because I needed to stand in that painting. And I suspect I’m not the only one — it’s one of the most recognizable paintings in the world and Paris is a city of romantics.

At Cloud Gate on a regular sunny day, I’m not sure there’s a lot of spiritual transformation happening. People walk right up to it, to sit underneath it, put their feet on the walls of the structure and take selfies at weird angles, make funny faces, take group photos, play with the distortion of the city and the sky and themselves in the fun house mirror of the Bean. 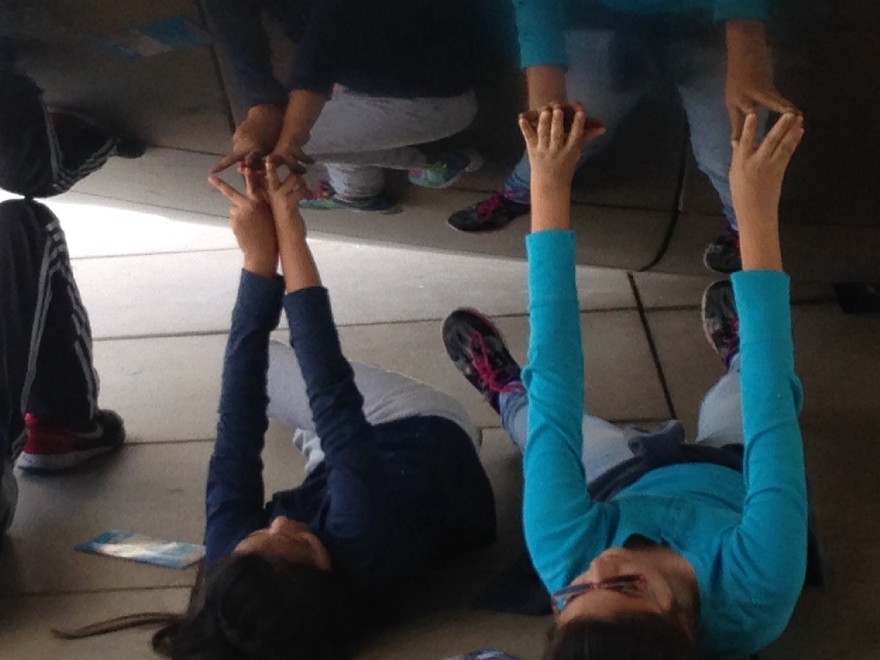 But if laughter is communication with the gods, then the Omphalos is a clear channel — the amount of smiling faces, laughing families and pure human joy captured every day in Kapoor’s reflective sculpture, reflects the most wonderful things about ourselves back to ourselves and if you’re in the proximity of the Bean, you can’t help but share. I hope the gods are listening. 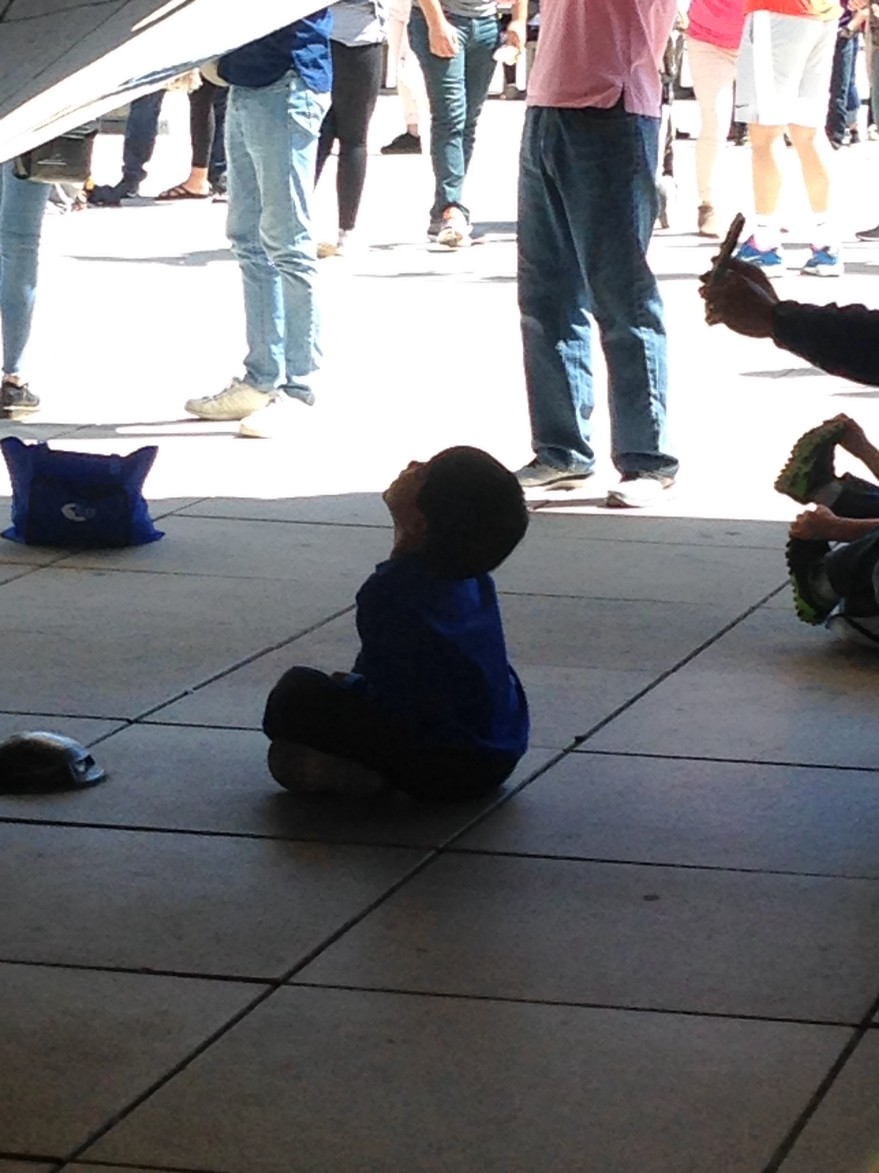 Cloud Gate is located in Millennium Park, just off of Washington and Michigan Avenue, in Chicago. You can visit it all year round.

The music in this episode is Soulful Strut, by the Young Holt Trio, used under the Fair Use Act.

Brought to you by Susie Kahlich of Artipoeus

If you like Artipoeus, please support them and help them grow by rating your favorite episode on iTunes. Just log into iTunes, search for Artipoeus, find your favorite show, and tell us what you think! Thanks!